Anatomy of the Knee

The knee joint is a complex joint which is actually three joints in one cavity. There are two joints between the thigh bone (femur) and the shin bone (tibia) and a joint between the thigh bone (femur) and the knee cap (patella). The complexity of the joint necessitates an experienced knee surgeon, such as Mr Gordon Shepard, to undertake diagnosis and treatment of any problems that arise with it.

Due to the shape of the articular surfaces, that is curved on flat, the joint is intrinsically unstable. It depends upon surrounding ligaments and muscles for it’s stability. 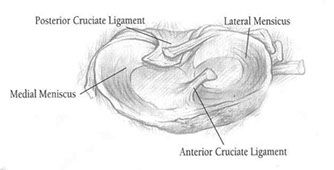 The main muscle groups around the knee are the quadriceps in front of the knee and the hamstrings behind the knee. The four quadriceps muscles join into a single tendon in which the patella lies. The patellar tendon (or ligament) then runs from the patella to the tibia in front of and below the knee. The hamstring muscles attach to the tibia on both the inner and outer sides and, with the calf muscles, form a diamond shaped area behind the knee called the popliteal fossa.

Between the femur and the tibia lie the two meniscal cartilages. These are c-shaped and they act as shock absorbers and help spread the load transmitted through the knee over a greater area. These are “the cartilages” that are commonly torn by sportsmen.