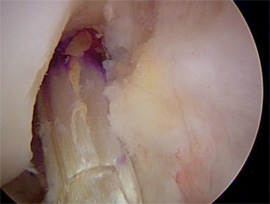 Anterior cruciate ligament surgery is not an operation for the occasional surgeon and should only be carried out by a surgeon with experience and training in the field, such as Mr Gordon Shepard. Repair is not possible and so the ligament has to be reconstructed. The traditional graft for ACL reconstruction was the central third of the patellar tendon with bone blocks cut from the kneecap and the shin attached to it (BTB). There is an incidence of anterior knee pain following the use of this graft and so surgeons are increasingly using one or two of the hamstring tendons. The graft has comparable results at long term follow-up but has the advantage of being able to be harvested through a smaller incision which results in fewer anterior knee problems post-operatively. However for elite sportsmen/women the BTB method is still used to prevent recurrent hamstring problems from the donor site.

The operation is performed through an approximately four centimetre incision over the front of the top of the tibia and through two one centimetre incisions on the front of the knee. The tendons are harvested and fashioned into a four strand graft. The remnants of the old ligament are then removed arthroscopically and using arthroscopic guidance a tunnel into the knee is drilled through the femur and the tibia. The position of the tunnels is vital to the success of the surgery. The graft is then pulled through these tunnels into position and fixed.

Post-operatively, the patient goes home the same day or the following day on crutches and starts physiotherapy immediately. The physiotherapy regime lasts between 3 and 9 months dependent on progress and is probably the most important part of the whole procedure. Failure to comply with the rehab program will result in failure of the procedure.

The procedure is very successful in the majority of patients. Return to sport is the aim of treatment.